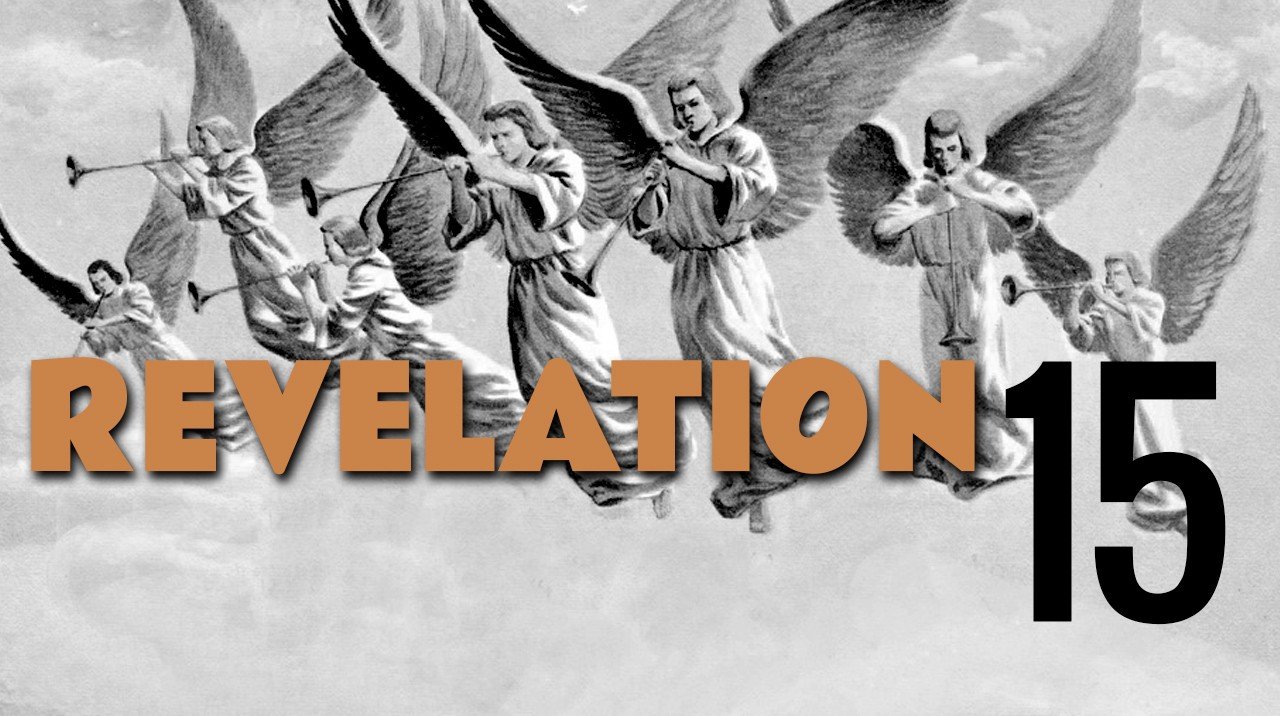 The Seven Angels with Seven Plagues

15 Then I saw another sign in heaven, great and amazing, seven angels with seven plagues, which are the last, for with them the wrath of God is finished.

And I saw what appeared to be a sea of glass mingled with fire—and also those who had conquered the beast and its image and the number of its name, standing beside the sea of glass with harps of God in their hands. And they sing the song of Moses, the servant of God, and the song of the Lamb, saying,

“Great and amazing are your deeds,
O Lord God the Almighty!
Just and true are your ways,
O King of the nations!
Who will not fear, O Lord,
and glorify your name?
For you alone are holy.
All nations will come
and worship you,
for your righteous acts have been revealed.”

As the case with any fight – sometimes as the end is nearing, last-minute exertion, some last-ditch effort of strength is thrown out to try and overcome.  The loser will go down fighting all the way – in complete anger and hatred hoping they can claim the championship.

Based on Scripture the outcome of this match has never been in doubt.  And that said, the final smackdown is about to take place.  Ladies and Gentleman, take your seats, the bell is about to sound on the final round.

Solemn words open Revelation 15 that creates a soberness as the final outpouring of God’s wrath is about to take place. Within this scene, the 7 angels with 7 plagues speak the certainty and completeness of the divine wrath that would come against this unbelieving world.

It is here John sees those who have emerged from their final battle with the beast – now standing victorious upon the crystal surface before the throne of God Almighty.  These have held strong.  They did not love their life so much as to lose it.  They did not abandon the Christ nor succumbed or justified any of the threats of the Antichrist.  They held firm to their commitment and relationship.

A song, a beautiful song explodes from their mouth from those who had remained steadfast in their commitment to the Lamb.  They sing a song named after 2 key players in the story of redemptive history:  Moses and the Lamb.

And this mix of the 2 may seem strange at first.  But Moses represents that of the Old Covenant (being the Old Testament) made at Mount Sinai with the people of Israel.  The Lamb represents the New Covenant (being the New Testament) made by at Mount Calvary between Jesus the Christ and all who would believe Him to be Savior and Lord.  It’s the blending of the covenants – the old being taken over by a new.

Let’s pause for just a moment and talk about a covenant.  This is critical to our understanding of this moment in heaven but more importantly of God holding up his end of the bargain with His people, those who follow Him.    What did that song say?  He is just and true.  Great and marvelous are His works.  He is holy.

A covenant is a mutual arrangement and agreement defining a relationship between two parties.

Throughout Scripture, God enters into a relationship with certain individuals and strikes a covenant.  He did this with Abraham in Genesis 15; He entered into one with David in Samuel 7 and in particular, he moved into covenants with specific people – mainly Israel throughout the Old Testament.  Within that covenant, it specifies specific obligations imposed and expected by entering into such an agreement.  These expectations were to be held by both parties.

So it was, that the covenant between God and Israel mediated by Moses, called them to faithfully observe moral and ritual commandments found in 4 of the 5 opening books of the Old Testament.  Specifics were laid out as to what was expected of them to remain in this agreement.

God’s part involved the promise that if they upheld their end of the deal, He would bless them and preserve them as a nation.  Yet over and over in Scripture, we read where they continuously, almost habitually broke their end of the covenant.  This constantly put their continuance in jeopardy.  And so on different occasions, God’s hand was lifted, his protection was gone – and they would find themselves as prisoners, aliens in a foreign land.  Their determination to break these agreements not only affected their own lives but generations to come.

But because God loved them, because He held a special place for these people, in time his hand would return.  New generations would rise up and at least initially follow once again.  The revival of living in that covenant would surface.  It would be very rich times.

But what is interesting is that the prophets, who were the mouthpiece of God, began to see or should I say foresaw a new covenant that would come.  And this new covenant would be far superior to the old because God would write this covenant in their hearts.  Additional reading would be found on these matters in Jeremiah 31″31-34 and Ezekiel 34:25, 30-31, 36:25-27.

This new covenant would come through Jesus as He established it through his death – which is what paid for our sins.  Anyone who would repent of their life, their sins, put their complete hope and trust in Him would be forgiven and more importantly live in eternity with Him.  Jesus spoke of this as He sat with his disciples that last night of His life over dinner.

“When the time came, Jesus and the apostles sat down together at the table. 15 Jesus said, “I have been very eager to eat this Passover meal with you before my suffering begins. 16 For I tell you now that I won’t eat this meal again until its meaning is fulfilled in the Kingdom of God.”

20 After supper he took another cup of wine and said, “This cup is the new covenant between God and his people—an agreement confirmed with my blood, which is poured out as a sacrifice for you.“

Ultimately, through His death and resurrection, this new covenant was established.  And it is through the Holy Spirit, the Spirit that God spoke of in Ezekiel being placed within, there’s now a faithful obedience on the part of the new people of God.  This outpouring of lavish love of Jesus and Holy Spirit within enables us to follow and be obedient and live in freedom from the bondage, as our hearts have become responsive to Him and His ways.  And this new covenant is made up of both believing Jews and Gentiles.  It is for all people.

Do you see how magnificently all of this comes full circle? There was once an old covenant that has now become a new one which has taken place through Jesus.  It is for all people who will put their faith and trust in Him.  It is the forgiveness of sins.  It involves the incredible outpouring and life-giving Spirit that has freed us from the power of sin that so doggedly nips at our heels.  Part of the old required for sin to be removed, the shedding of blood must be spilled.  This was also part of the new.

One last thing here – the Old Covenant festival called Passover features a lamb whose blood is smeared on top of the doorframe and posts of Hebrew homes so that the destroying angel passes over those homes, sparing the inhabitants.  The New Covenant features the ultimate fulfillment of this ritual in Jesus who as John 1:29 states: Behold the Lamb who takes away the sins of the world.”  For those who believe, Jesus’ blood has been smeared across the doorframes of our hearts.

And so, it is no mere coincidence that the primary image we see of Jesus in this book of Revelation is that of a Lamb standing and looking as if it’d been slaughtered.  It was.  For you.

Amazingly, the lyrics to that song here in Revelation 15 have tremendous overlap to many OT passages. “Glorious and majestic are his deeds” is found in Psalms 111. “The Lord God Almighty is his name” is found in Amos 4. “All his ways are just” is found in Deuteronomy 32. “O King of the nations” comes from Jeremiah 10.

From this context, it is clear that this is not just a Christian song. We see overlapping praise and worship from Jewish and Hebrew language as well as the reference to Moses. However, it also encompasses Greek and New Testament messianic language. The text distinctively states it is a song of Moses and a song of the Lamb which marries the two under one theme. It is a collision of truth and grace. The expectation is that God is worthy to be praised and His righteous acts will be revealed.

And this is where we can rest as we read Revelation. As believers who are hidden in Christ, there is no fear as we read Revelation 15. In fact, we can rejoice with this song as we join in God’s victory over sin, death, and evil forever. There is nothing scary about Revelation if you know Jesus. The words written here testify to the reality and severity of those who oppose God. The atrocious judgment strikes fear into those who do not trust in slain Lamb of God and those who procrastinated in their faith while only serving themselves.

The Return of the Creatures

For the first time in several chapters, we hear from the 4 living creatures once again here in Revelation 15. They are granted the authority to hand over the 7 bowls of wrath to these 7 angels. It’s important to note the participation and authority given by God to these spiritual beings around Him.

The angels, the elders, the 4 living creatures, the 144,000, John and all the apostles, the early church, and everyone who bears the title child of God; we are all given opportunities as part of God’s family to participate and cooperate with His master plan. God doesn’t need us, but He chooses to include us. It’s a privilege.

I don’t know about you, but I want to be like the angelic beings who are singing a new song to the Lamb. I want to be like one of the 4 living creatures, who, when God needs something done and calls my name, I can step up and follow through with what He’s asked of me. I know it’s not easy. I’m in the same boat you are.

We can do better. I can do better. Revelation shows us that the time to take responsibility for our own spiritual condition is here and now, not sometime in the future. But only by His grace. Because He did what He did, we are empowered to do what He asks. Without that perspective, nothing will ever change.

Revelation 15 Sermon
The Boxcutter Podcast – Revelation 15: Can God Trust You With Authority?