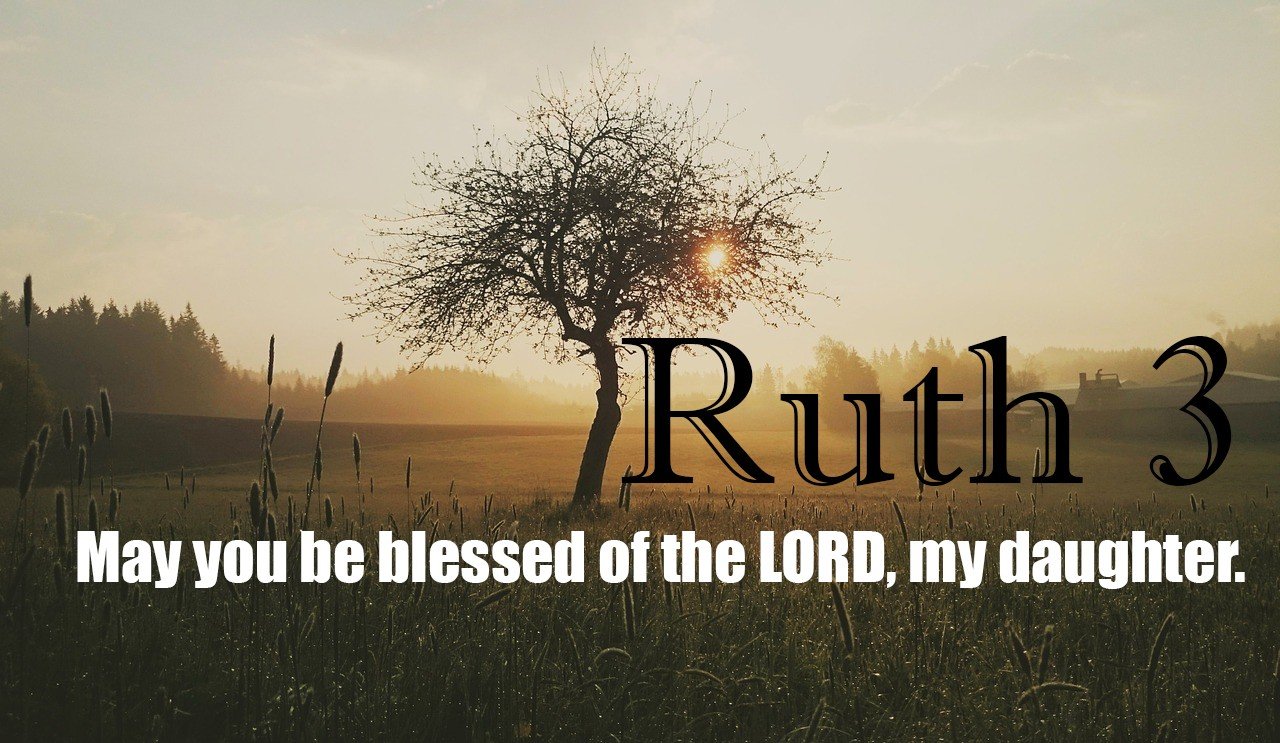 Ruth and Boaz at the Threshing Floor

3 Then Naomi her mother-in-law said to her, “My daughter, should I not seek rest for you, that it may be well with you? Is not Boaz our relative, with whose young women you were? See, he is winnowing barley tonight at the threshing floor. Wash therefore and anoint yourself, and put on your cloak and go down to the threshing floor, but do not make yourself known to the man until he has finished eating and drinking. But when he lies down, observe the place where he lies. Then go and uncover his feet and lie down, and he will tell you what to do.” And she replied, “All that you say I will do.”

So she went down to the threshing floor and did just as her mother-in-law had commanded her. And when Boaz had eaten and drunk, and his heart was merry, he went to lie down at the end of the heap of grain. Then she came softly and uncovered his feet and lay down. At midnight the man was startled and turned over, and behold, a woman lay at his feet! He said, “Who are you?” And she answered, “I am Ruth, your servant. Spread your wings over your servant, for you are a redeemer.” And he said, “May you be blessed by the LORD, my daughter. You have made this last kindness greater than the first in that you have not gone after young men, whether poor or rich. And now, my daughter, do not fear. I will do for you all that you ask, for all my fellow townsmen know that you are a worthy woman. And now it is true that I am a redeemer. Yet there is a redeemer nearer than I. Remain tonight, and in the morning, if he will redeem you, good; let him do it. But if he is not willing to redeem you, then, as the LORD lives, I will redeem you. Lie down until the morning.”

So she lay at his feet until the morning, but arose before one could recognize another. And he said, “Let it not be known that the woman came to the threshing floor.” And he said, “Bring the garment you are wearing and hold it out.” So she held it, and he measured out six measures of barley and put it on her. Then she went into the city. And when she came to her mother-in-law, she said, “How did you fare, my daughter?” Then she told her all that the man had done for her, saying, “These six measures of barley he gave to me, for he said to me, ‘You must not go back empty-handed to your mother-in-law.’” She replied, “Wait, my daughter, until you learn how the matter turns out, for the man will not rest but will settle the matter today.”

The blending of lives is a beautiful thing.  We probably don’t think about that much with the relationships we hold.  But all relationships we have and hold have been brought together through strings of common ground or direct longings.  As Believers, our relationships are not by chance.  I am a firm believer God has woven our lives with others for His glory.  That may sound like a bit of a stretch but if we believe everything we do and everything we have is for His glory, the people in our lives are for a purpose.

For Ruth and Naomi, we read of different cultures, family backgrounds and age being blended.  The ever ongoing joke of mother in laws and their daughter in laws has no room here.  There is no doubt with any relationship there are tensions and they certainly would have had them.  But the strings of love and tenderness overrode their dire situation.  In the end, they served the God of Israel and that was the basis of all their hope, strength and for certain their future.

You see, Ruth came to know and understand God through Naomi.  She saw her in the worst and best of times.  She witnessed her in such sorrow and possibly doubting but never lost that foundation of faith.

Then there’s Boaz.  Here was a man in the culture of the time (remember this is the Judges era when everyone did what was right in his own eyes), who simply did the right thing at the right time.  Never knowing his far reaching impact (Hello, through this union of him and Ruth – the Messiah would come!) he was simply all in with looking out for the least of these.  We read this was across the board for him. From the way he interacted with his employees, dealt with officials and relatives, he was motivated by tenderness and compassion.  He even was willing to wade through the legal aspects and complications of marrying Ruth.

It seems to me he simply did the right thing, all the time.  He was a man who was upright and faithful.

This turns for us to consider our own relationships.  How much are we glorifying God in the ones we hold?  The most intimate friends and relationships we have, who know us best, are we the same people to them when intimate as we are to the world around?  How does our life read?  What statements are we making through our actions and attitudes about God and His redemption?  In the rawness of our own lives, where the bottom drops out, the problems we face that are mountainous, are we hanging onto our God despite?  You see, this translates as well and makes a statement from the intimate relationships to the casual.

Every relationship we hold is for a purpose.  Yes, we could look at that from a secular perspective and certainly check the boxes as why this is true.  But from the spiritual viewpoint, the same is true.  We are where we are, with whom we are for a purpose.  What would change for you and all your interactions if you lived this way?

The act of Naomi asking Ruth to go and seek out Boaz does not translate well to our current cultural norms. Boaz was not only a relative, but he was considered the goel, or, kinsman-redeemer for the family. This role was prevalent in Israel’s family affairs. As kinsman-redeemer, Boaz had responsibilities which included…

Though it may seem bold that Ruth went so directly to Boaz, it was considered an appropriate custom at the time. She was appealing to Boaz as the kinsman-redeemer to guard and protect the future. For Boaz, it would be a decision that affected the legacy of Elimelech and his family.

Though Ruth had a right to come and demand this from Boaz, Naomi counseled her to go in humility. To sit at the feet of someone was to come as a servant in complete submission. It was a sign of respect and dignity. Many today could learn from this lesson of forgoing your “right” to serve in humility!