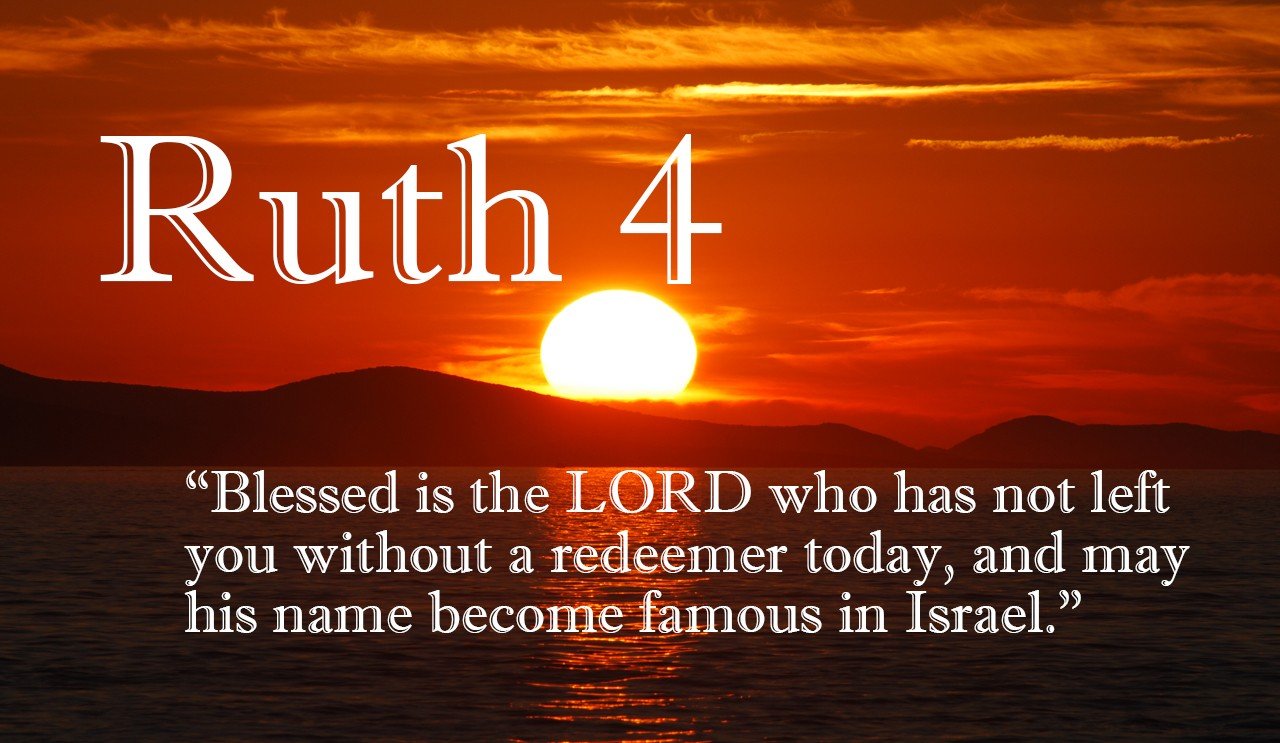 4 Now Boaz had gone up to the gate and sat down there. And behold, the redeemer, of whom Boaz had spoken, came by. So Boaz said, “Turn aside, friend; sit down here.” And he turned aside and sat down. And he took ten men of the elders of the city and said, “Sit down here.” So they sat down. Then he said to the redeemer, “Naomi, who has come back from the country of Moab, is selling the parcel of land that belonged to our relative Elimelech. So I thought I would tell you of it and say, ‘Buy it in the presence of those sitting here and in the presence of the elders of my people.’ If you will redeem it, redeem it. But if you will not, tell me, that I may know, for there is no one besides you to redeem it, and I come after you.” And he said, “I will redeem it.” Then Boaz said, “The day you buy the field from the hand of Naomi, you also acquire Ruth the Moabite, the widow of the dead, in order to perpetuate the name of the dead in his inheritance.” Then the redeemer said, “I cannot redeem it for myself, lest I impair my own inheritance. Take my right of redemption yourself, for I cannot redeem it.”

Now this was the custom in former times in Israel concerning redeeming and exchanging: to confirm a transaction, the one drew off his sandal and gave it to the other, and this was the manner of attesting in Israel. So when the redeemer said to Boaz, “Buy it for yourself,” he drew off his sandal. Then Boaz said to the elders and all the people, “You are witnesses this day that I have bought from the hand of Naomi all that belonged to Elimelech and all that belonged to Chilion and to Mahlon. Also Ruth the Moabite, the widow of Mahlon, I have bought to be my wife, to perpetuate the name of the dead in his inheritance, that the name of the dead may not be cut off from among his brothers and from the gate of his native place. You are witnesses this day.” Then all the people who were at the gate and the elders said, “We are witnesses. May the LORD make the woman, who is coming into your house, like Rachel and Leah, who together built up the house of Israel. May you act worthily in Ephrathah and be renowned in Bethlehem, and may your house be like the house of Perez, whom Tamar bore to Judah, because of the offspring that the LORD will give you by this young woman.”

So Boaz took Ruth, and she became his wife. And he went in to her, and the LORD gave her conception, and she bore a son. Then the women said to Naomi, “Blessed be the LORD, who has not left you this day without a redeemer, and may his name be renowned in Israel! He shall be to you a restorer of life and a nourisher of your old age, for your daughter-in-law who loves you, who is more to you than seven sons, has given birth to him.” Then Naomi took the child and laid him on her lap and became his nurse. And the women of the neighborhood gave him a name, saying, “A son has been born to Naomi.” They named him Obed. He was the father of Jesse, the father of David.

The Genealogy of David

“God’s hand is all over history.  God works out His purpose, generation after generation.  Limited as we are to one lifetime, each of us sees so little of what happens.  A genealogy is a striking way of bringing before us the continuity of God’s purposes through the ages.  The process of history is not haphazard. There is a purpose in it all.  The purpose is the purpose of God.”

The short book of Ruth opens with tragedy and pain.  It closes in beauty.  The women in the story are faced with terrible things.  Naomi who is so disillusioned by the deaths of not only her husband but sons states, “The Lord has dealt very bitterly with me… He has brought me home again empty… the Lord has testified against me” (Ruth 1:20-21)

Sometimes we feel just like this when all we had falls apart.  The dreams we pursued disintegrate through our fingers.  It’s hard to see where God is in the middle of pain and hardship.  We’ve all been there.  We’ve all questioned.

Yet the lovely aspect of this story is God was working a far-reaching plan unseen to the women.  He is doing just the same with us.  As Naomi was desperate, so we become.  Such desperation can drive us one of two ways.  We either reject God and walk away or we’re honest about where we are and allow Him to work.  It’s a process, I know.  But through all the dire situations these women faced, in particular, Naomi at the beginning, she never turned her back on God.  Her honesty yet still seeking is what directed the footsteps of Ruth who would play such an important role in generations to come.

Naomi continued to trust God even though she didn’t understand.  This brought tremendous blessings unheard or perceived.  Even when we have been inundated with such tragedy and sorrow, when things are completely upended God can bring great blessings.

For some, this is just a nice story.  For others, they view the lives of Ruth and Boaz as a romantic tale.  But the larger aspect to grasp is the far-reaching picture God was painting.  Through this union, God was preparing the way for Jesus the Messiah.  God had a view of eternity through all of this.  He holds the same views of our own choices that reflect eternal matters.

In actuality, Jesus is all through this book! You see, Naomi’s return to Bethlehem would set the stage centuries later for Mary and Joseph to return to fulfill a census where Jesus would be born.  The prophets had spoken of such.  But as the book introduces the thought of Kinsman-Redeemer through Boaz, Jesus would be this incarnate.  Jesus became a man so he could save us.  He is our Kinsman.

The Kinsman-Redeemer had a duty of buying family members out of slavery and Jesus redeemed us from the slavery of sin.  Boaz as Kinsman-Redeemer was not motivated by self-interest but love and Jesus’ ultimate actions were the same.  Boaz in time would take Ruth to be his wife, and Jesus our Kinsman-Redeemer will do the same upon His return as we are the Bride of Christ.

Thanks be to God for His unbelievable far-reaching plan that came together through these lives which affected all people!  But also thanks be to God who has full purpose for each of us even in tragedy with a larger story to be told.

You may remember a few chapters back when Ruth worked hard pacing the fields and following the reaper’s footsteps. Now, as she has become one with the owner, that land becomes her inheritance.

As Hank mentioned there are many similarities to Boaz as Ruth’s Kinsman-Redeemer and Jesus as ours. Just as Ruth became one with her husband and no longer worked the fields, when we become one with Christ, we no longer work for our redemption. We are redeemed and united with Christ, resurrected with Him in the Spirit while bearing fruit for our Lord.

There is foreshadowing here as well since Ruth was a Gentile. This story illustrates the Gospel’s implications on all every tribe, tongue, and race. Jesus has come to redeem all His faithful followers!