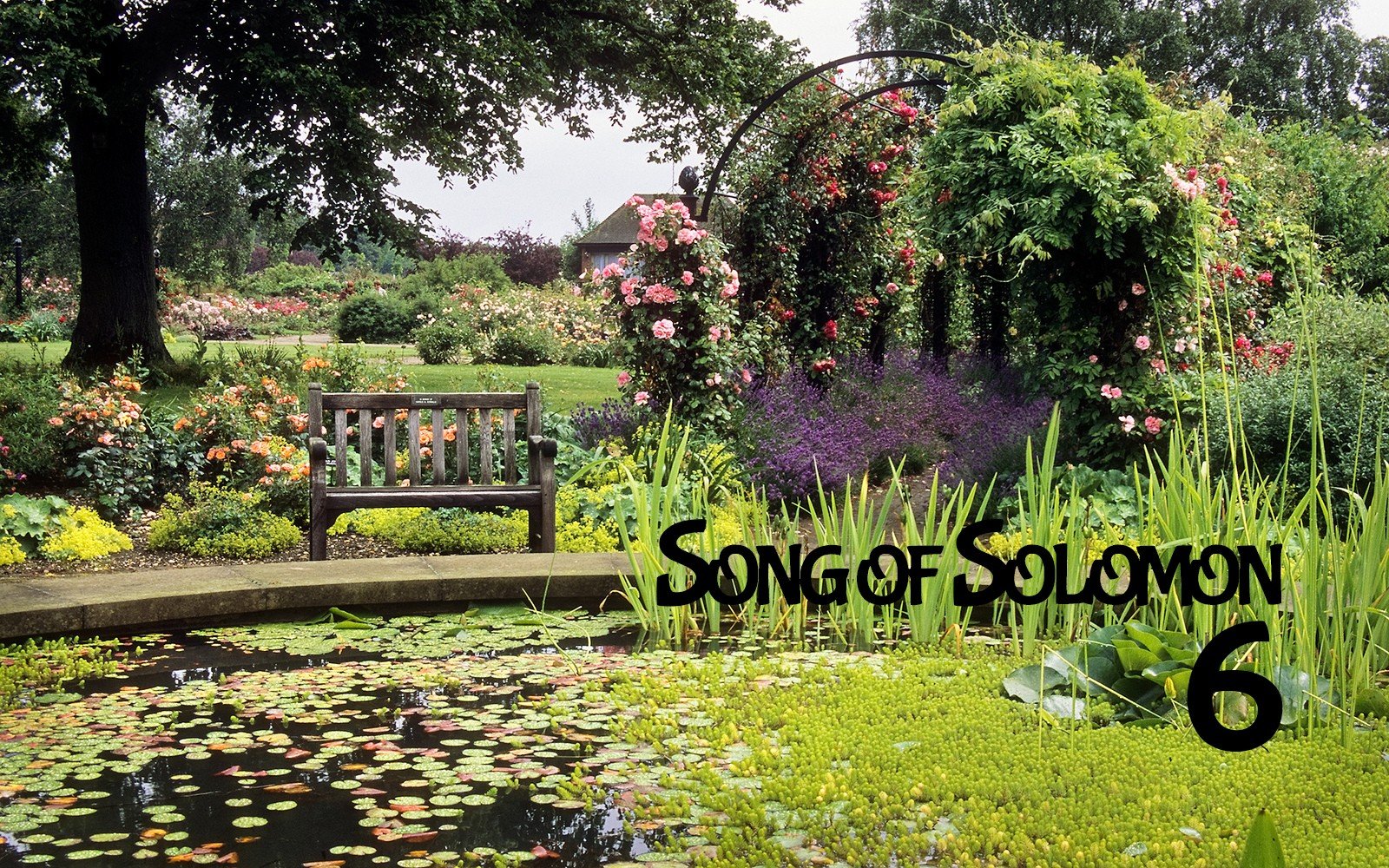 Together in the Garden of Love

My beloved has gone down to his garden
to the beds of spices,
to graze in the gardens
and to gather lilies.
I am my beloved’s and my beloved is mine;
he grazes among the lilies.

Solomon and His Bride Delight in Each Other

You are beautiful as Tirzah, my love,
lovely as Jerusalem,
awesome as an army with banners.
Turn away your eyes from me,
for they overwhelm me—
Your hair is like a flock of goats
leaping down the slopes of Gilead.
Your teeth are like a flock of ewes
that have come up from the washing;
all of them bear twins;
not one among them has lost its young.
Your cheeks are like halves of a pomegranate
behind your veil.
There are sixty queens and eighty concubines,
and virgins without number.
My dove, my perfect one, is the only one,
the only one of her mother,
pure to her who bore her.
The young women saw her and called her blessed;
the queens and concubines also, and they praised her.
“Who is this who looks down like the dawn,
beautiful as the moon, bright as the sun,
awesome as an army with banners?”

I went down to the nut orchard
to look at the blossoms of the valley,
to see whether the vines had budded,
whether the pomegranates were in bloom.
Before I was aware, my desire set me
among the chariots of my kinsman, a prince.

Why should you look upon the Shulammite,
as upon a dance before two armies?

We are bombarded with imagery of what makes a marriage fulfilling.  Often inundated with concepts of romantic love through book and film, what is left out is the reality a good marriage takes work.  Continuing from the previous chapter, as friends ask where her love has gone she realizes she has not really lost him.  Initially, the problems that arose between were based on feelings and reactions not upon thoughts of truth.  Thinking through the fundamentals of their relationship she comes to the realization she had been wrong in her behavior.

Where she wanted to be was with him. Her selfishness and lazy behavior in chapter 5 she is back where she longs to be.  The bride had to come to a place of awareness that focusing on her feelings had caused division.  Instead, now with the fog of feelings cleared her true feelings of love resurfaced.

“I am my beloved and my beloved is mine.”  This simple statement speaks to the absolute completeness she feels with her love.  His absence had brought the reality of what value her husband brought to her.

“The ability of a couple to succeed in their marriage is equal to the ability of that couple to forgive and accept forgiveness. When this willingness on the part of both become a habit, then the bubble of romance that began their relationship will become a diamond that will last forever.”

I’ve witnessed many a marriage where forgiveness is not extended for failures.  Like holding something over the others head, the reminder of where the other failed is brought out again and again.  This not only destroys intimacy but the relationship itself.  And truly, more often than not this sets the course for 2 living completely separate lives though married.  Such an unwillingness to forgive even the littlest of things cripples the couple from moving forward.  Sometimes this behavior is based on control.  Other times it’s the attitude of wanting the other to pay for their failure.  Holding these things together is selfishness.

It is true, the bride had to come to her senses over matters.  So must we when there is division in a relationship.  We have to get past ourselves and look at the matter with truth.  That means we put ourselves under the microscope with our own actions and thoughts.  It also requires reconciliation which she sought from her love.  But just as important, there must be a reassurance from the other.  Solomon compassionately assured her of forgiveness and did away with any insecurities by stating his love for her still above anyone else.

The theme of this chapter is most definitely reconciliation. As Hank has written, any successful marriage must involve lots of forgiveness. But there are several contextual questions I asked as I read this chapter. Take this statement by Solomon as an example…

“There are sixty queens and eighty concubines, and maidens without number; but my dove, my perfect one, is unique…”

It’s no secret Solomon had lots of women. Was he comparing her to all the others? A closer look reveals there is no language of relationship to any of these he is describing. He goes from 60 to 80 to “all women” in his description. This was a common literary effect that illustrated the simple truth he felt in his heart. His beloved was far above any other woman. He affirms this in the next verse (9) by affirming that she is literally the best of the best. So, yes, there may be a general comparison but there is no indication that Solomon is directly comparing her to the women he has been in a relationship with.

Verses 11 and 12 seem really out of place. It goes from Solomon praising his beloved to talking about his stroll through the garden and the chariots of his kinsmen. Commentators agree on the difficulty of these passages and there is not really a good interpretation. The most likely scenario is that these verses are another example of the extreme love that these two have for each other.

We know it’s love because it’s not just words being spoken. It’s not just an attraction. There has been a conflict and forgiveness. The love that is promoted so much in our world today is a truly shallow emotion compared to what we read here in Song of Solomon.